SAVE UP TO 70% on greeting Â CARDS and WE MAIL THEM OUTÂ  for you and write them too! You provide us your data base and wording for cards to send and we take it from there – SCHEDULE, DESIGN, PRINT and MAIL – all for ONE LOW COST! (less than what you would pay for a store card – and we handle all the writing , addressing and mailing! Coupon Country Cards takes care of that daunting task of writing and sending out all those cards for you and they are personalized – in blue ink , handwritten type style. And , once we have your data loaded, we can send out future cards in a snap. AND NOW send a GIFT along with cards! Photo cards , too! For as little as $10 we can add a gift with your card!!! Choose from a wide variety of gifts at our website

Also, great for businesses … Send a year-end ‘thank you’ card or postcard to your loyal customers. Dentists and Doctors , carpet cleaners and mortgage companies use CouponCountryCards as Reminder send outs. Include a promotional message and double your strategy for one low price!

We can show you how to send your personalized greeting cards for less than $1.00 each! Each card includes your personal message in your handwriting with ..

Save Time and Money – FREE CARDS!

HOLIDAY CARDS 70% OFF plus 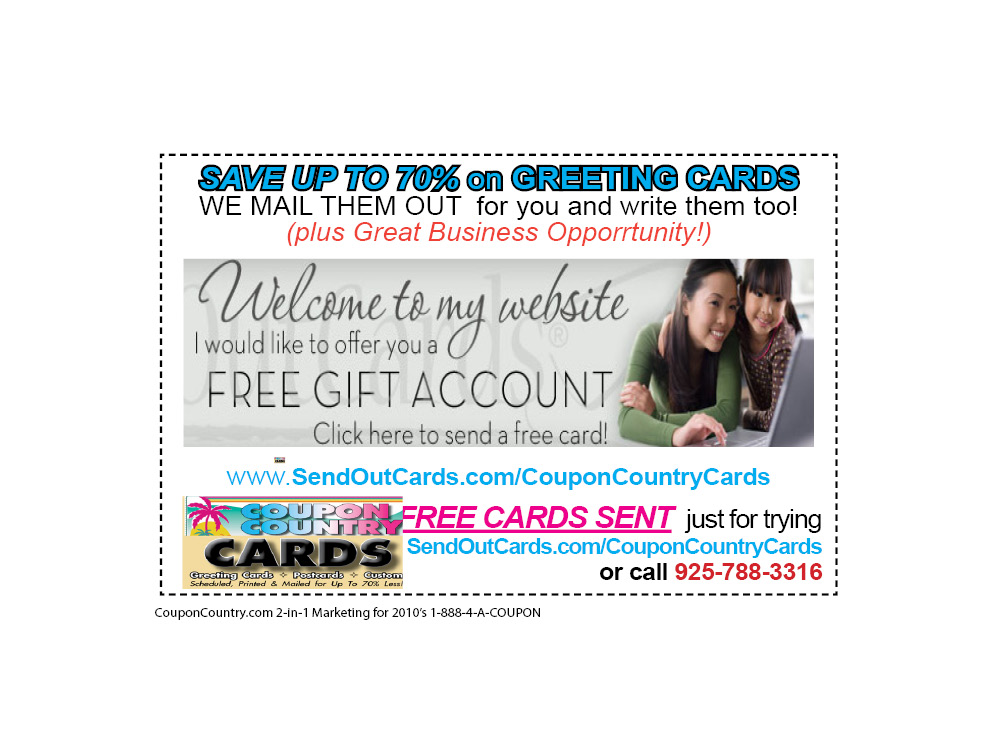 It shouldn’t be surprising that online shopping is growing more than 10 times faster than physical retail shopping. Whether consumers are fully conscious of it, they are saving on not one but THREE factors: MONEY, TIME and GAS. It seems that the old objection that ‘You can’t touch it’ is not so much a factor in keeping shoppers away from internet buying.

Total sales generated by e-commerce have grown explosively over the last five years. Though economic growth has been flattened by the recession, online retail still shows more signs of life during recession than consumer retail as a whole, according to Mittel
(www.researchandmarkets.com/…/online_shopping_us_2009.pdf)

Online spending grew nearly 20 times faster than the overall UK retail market last year, according to recent research. A survey by retail analyst Verdict shows that street (physical) shopping spending grew by 1.5 per cent in 2005, compared with 28.9 per cent for internet (virtual) shopping – although the web still accounts for only 3.1 per cent of total retail sales. The number of online shoppers grew by 25.5 per cent to 14.6 million

GAS: It’s fairly obvious that driving to your local mall or shopping center can eat up a lot of gasoline, depending how far you drive, idle in traffic, etc. Gas is not only an expense but adding to polluting the environment.

MONEY: You are saving not only on 1) Gas but 2)special Online Discount Pricing. Retailers can charge less for online purchases with less overhead expense. Many are not aware of this. One can go online for Grocery coupons from most major product brands and grocery stores and most of the top retailers, or ‘bix box’ stores like Macy’s, Best Buy, Kmart, Target, Walmart, , etc. and find any number of added value deals, including FREE Shipping! Retailers have become more and more interested in selling online , of late, as internet sales continue to grow at a faster rate than retail sales . Most of these big retailers have joined the world of ‘Affiliate Marketing,’ teaming up with e-commerce sites to sell market their products online. One such site is http://www.yellowpagescoupons.com , where one can save tremendously in the comfort of his or her home shopping hundreds of online merchants including all the above named!

TIME: In today’s busy world, time can be as precious or more precious than saving money sometimes. Instead of spending countless hours driving around from store to store, waiting in traffic, parking, etc., one can purchase most needed items -if not all-right right onlinein the comfort of his or her home and in a fraction of the time!